The West Desert Water Grab proposal from Cedar City, Utah is a dark horse riding in the areas that are near and dear to our hearts. The Central Iron County Water Conservancy District (CICWCD) filed applications for water in Pine, Wah Wah and Hamlin Valleys back in 2006. Rural communities and officials in Beaver County protested. After years of fighting, Beaver County, Iron County and other parties reached a flawed settlement agreement for water in Pine and Wah Wah in 2019. Hamlin Valley hearings have not been scheduled yet. Now, CICWCD is applying to BLM for a Right of Way on federal lands for the first phase of its pipeline boondoggle in Pine Valley.

Fortunately, our friends in Beaver County are not acquiescing and are working with officials in Millard, Juab and White Pine Counties to oppose the project.

The Confederated Tribes of the Goshute Reservation, the Paiute Indian Tribe of Utah, the Ely Shoshone, and the Duckwater Shoshone have all opposed the project as well. Farmers, ranchers and other folks who live along the NV-UT border lands are also pushing back.

Why Are We All Fighting?

Sacred sites, rangelands, endangered species, and communities in the West Desert are all at risk of losing their water. The water CICWCD wants will be stolen from under-ground flow systems that feed the Great Salt Lake. Great Basin National Park, Fish Springs National Wildlife Refuge, and other public resources will be thrust into harm’s way.

What Are The Issues?

What’s the problem with this three-phase pro-ject? CICWCD wants to pump 15,000 acre feet/year (afy) out of Pine Valley (Phase 1), 11,000 afy Wah Wah Valley (Phase 2), and – ultimately – 10,000 afy in Hamlin Valley (Phase 3). A 2019 USGS report found that only 11,000 afy exists for the taking be-tween Pine and Wah Wah – rather than the 26,000 afy CICWCD has on paper. According to the USGS, the project’s first two phases will suck water away from places like Snake Valley and Spring Valley – as well as basins in Lincoln County. Add in Hamlin Valley and it will be even worse.

CICWCD is currently over-drafting the Cedar Valley aquifer by at least 7,000 afy per year. Yet it has no meaningful water conser-vation programs in its community. No turf re-moval rebates. No pricing incentives. No ma-jor recycling programs. Instead, CICWCD is thinking about the short-term and a supply that will cost more than $400 million for Pine and Wah Wah Valleys. Unfortunately, ratepayers will be left footing the bill for a project that doesn’t deliver. Once CICWCD drains Pine and Wah Wah Valleys, where will it go next? Snake Valley, Tule Valley and others will be tapped.

How Can You Help?

Write your members of Congress and contact local officials and be sure to reference the Environmental Impact Statement under development: DOI-BLM-UT-C010-2020-0012-EIS. The message? Let all your representatives know that the water CICWCD wants doesn’t exist. Also be ready to get involved later this year when the EIS is released for public review and comment. 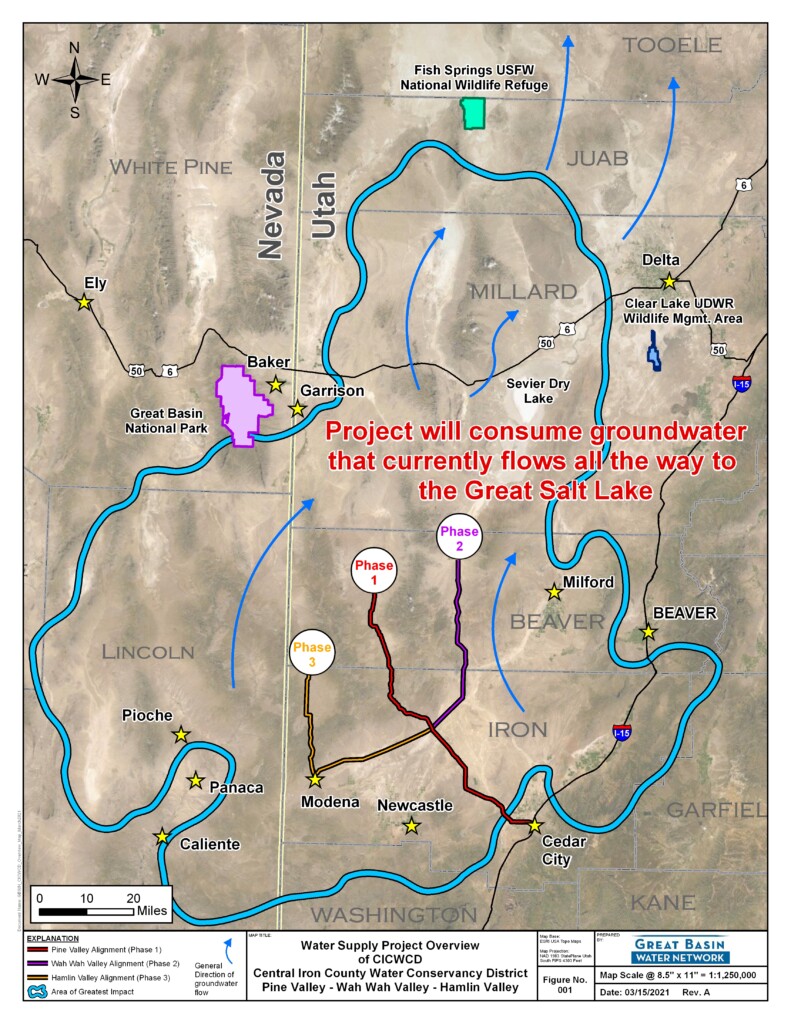