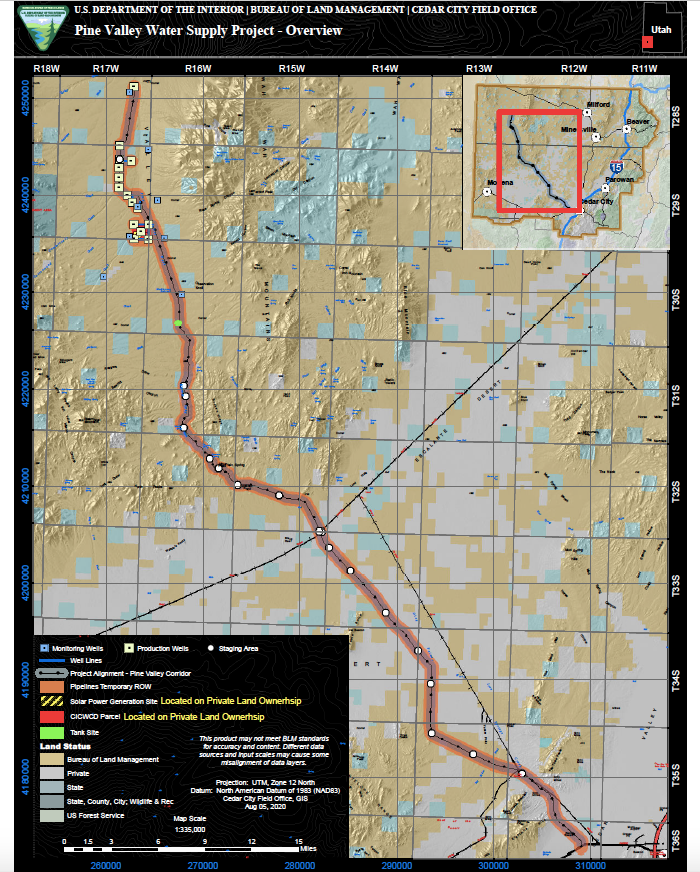 Two project proposals in Utah are a major threat to GBWN’s long-term mission and preserving our victory in stopping the Las Vegas Pipeline: the Pine Valley Water Supply Project in Utah’s West Desert and the Lake Powell Pipeline for St. George.

The Pine Valley Water Supply Project is proposed by the Central Iron County Water Conservancy District based in Cedar City, UT. This project has been in the works since the mid 2000s and targets limited groundwater supplies in rural Utah –– potentially taking 26,000 acre-feet annually or more in the long run. While named for the basin of export, it is more accurate to call it the Cedar City Pipeline, the proposed water destination. USGS data show that there could be drawdown of around 1,900 feet in the two basins where CICWD has water rights for the project. Federal data estimate the impacts of the project could have a 10,000-square-mile radius.

The project was deemed such a threat to the border region that SNWA even intervened in the early years of the fight more than a decade ago. The project –– for now –– focuses on two groundwater basins in Beaver County’s part of the West Desert: Pine and Wah Wah valleys. But it will affect basins in White Pine (NV), Millard, Juab, Tooele and Salt Lake Counties as well. The proposed pumping will harm three flow systems that feed the Great Salt Lake. Other reports show that the water Cedar City wants just doesn’t exist. Hamlin Valley –– which is a de facto part of Snake Valley –– has always been a part of Iron County’s plans too. But the applications for about 10,000 acre-feet have yet to have a hearing before the Utah water engineer.

Right now, this project is undergoing an environmental review by the BLM for a right of way across federal lands for the main artery of the pipeline. GBWN, Beaver County and others are fighting this. We will be calling on you to help us push back in the coming weeks when the BLM Issues a Draft Environmental Impact Statement.

As a sibling to the Vegas Pipeline, this project is designed to feed sprawl and green lawns in St. George by sucking an extra 28 billion gallons of water out of the Colorado River every year. Yes, Lake Powell is hundreds of miles away from the Great Basin. But here’s how we see things. Any proposal that harms the Colorado River will ultimately harm our beloved places in the Great Basin. If water in the once-mighty river disappears, Colorado River Basin towns will have to get their water from somewhere else. Vegas, despite its many faults, has worked diligently to conserve and cut its use of the Colorado River. St. George has done none of that work. Per capita, residents use about 305 gallons per day in Southern Utah.

In Southern Nevada, they use about 120 gallons per capita per day. St. George doesn’t need billions of gallons of water a year from the Colorado River (currently the majority of its water comes from the Virgin River). What the town needs to do is rip out turf, turn off sprinklers and come to grips with the fact that they live in the desert. The Colorado is shrinking, having lost nearly a trillion gallons worth of flows since 1906. That will likely double by the end of the 21st century.

GBWN and a widespread coalition just submitted comments on the Bureau of Reclamation’s environmental review of the project. The Draft Environmental Impact Statement failed to include any analysis on potential conservation alternatives, effects on Lake Mead, and a meaningful analysis of water availability and climate change. On the day of the comment deadline, top water officials from six western states sent a letter to the Secretary of the Department of Interior that signaled litigation was likely if the project moves forward. In late September, in an unprecedented move, the Utah Department of Natural Resources requested an extended schedule from the Bureau of Reclamation to take more time to consider comments submitted on the DEIS.

The project needs congressional approval and the approval of the other Colorado River states. It doesn’t have it. Together we all must keep up the fight. Ninety percent of Vegas’ water comes from the Colorado River. Where will they look if the river runs dry? —Kyle Roerink and Steve Erickson, GBWN.